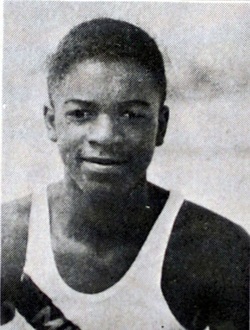 Born on January 31, 1919, in Cairo, Georgia, Jack Roosevelt Robinson was the youngest of Jerry and Mallie Robinson's five children. When Jackie was just a young infant, his father abandoned the family and left Mallie to raise the children alone. Having no other choice, Mallie moved the family to Pasadena, to live with her brother. Growing up, Robinson can recall watching his mother work extended hours as a housekeeper. “I thought she must have some kind of magic to be able to do all things she did, to work so hard and never complain and to make us all feel happy…”

Eventually the family was able to afford their own home in Pasedena. They quickly learned that being an African- American family in a mostly white neighborhood would prove to be a challenge.  Neighbors would often shout cruel names at Jackie and his family and constantly call the police on them for no apparent reason. Jackie’s family was able to preserver, taking the prejudice and turning it into pride. Gradually, the relations between the family and neighborhood improved.

Jackie’s childhood could be considered a wild one. Selling newspapers and vending hot dogs at the Rose Bowl stadium were both normal trades of Jackie’s, making a dollar here and there. In school he loved playing sports at recess. “In grammar school some of my classmates would share their lunches with me if I played on their team.” Although he showed examples of being a nice young gentleman, Jackie was very mischievous growing up. As a member of a street gang, Jack would often be out shoplifting or vandalizing property. Before long, Jackie was getting into trouble on a regular basis. It took two men, a local minister and a neighborhood mechanic,  to talk sense into Jackie and tell him that he has the potential to do great things with his life.